This guide has been prepared to teach beginners the purpose and basic rules of roulette. Below we will explain step by step how you can play the game, talk about the basic variants of roulette, and answer the most frequently asked questions about this classic casino game.

The Goal of the Game

The goal of this game is to predict which number or colour the ball will land on the roulette wheel. There are numbers from 0 to 36 on the wheel, and these are represented by the colours black, red, and green. Players can bet on a single number or a range of numbers. It is also possible to bet on a particular colour (black/red) or that the outcome will be an odd/even number. The probability of each of these outcomes is different, and the chances of winning & payouts are determined accordingly.

It is possible to explain the roulette game by dividing it into four phases. The game starts with the players placing their bets and continues with the croupier spinning the wheel. Winning players receive their payouts after the result is announced. Both winning and non-winning players can keep trying their luck in the next game.

On the roulette table, you can see numbers from 0 to 36 and the other betting options. These represent the outcomes of the wheel, and the players can place a bet on any of them. To do this, it is sufficient to place the chips on the number or option they want to bet on. However, the table does not show how much each bet pays: the player is expected to already know this. In this context, roulette payouts range from 35:1 to 1:1, which is determined by the probability of that bet winning. 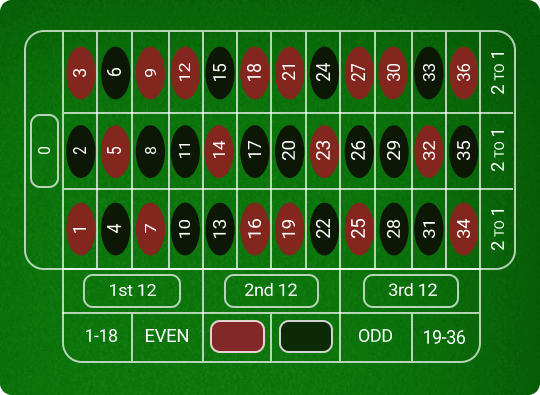 If the player wants to bet on a series of numbers known as “French bets”, placing chips will take less time because it is possible to bet without placing chips for this type of bet. As long as they have enough chips on the roulette table, players can verbally tell the croupier which bet they want to place. The croupier checks the table, and if he sees that the player has enough chips (even if those chips are not placed on the respective bet option), he accepts the bet. These are called “announced bets” because both the player and the croupier announce them. But it is important to note if you play online roulette, to make an announced bet, necessarily place a chip on one of the bets sections of the racetrack. Below you can see the main options of announced bets and the detailed information about each one.

Every roulette table has a minimum and maximum bet limit. These limits are different at each table, so there is no fixed limit applicable to all roulette games. The minimum bet represents the money that must be wagered (regardless of the bet option) to enter the game. The maximum bet (regardless of the bet option) is the highest amount of money accepted at that table. Players need to pay attention to them for two reasons. Firstly, table limits allow you to understand how well that game suits you (and your bankroll). Second, these limits are also important for the implementation of some roulette strategies. For example, in progressive betting strategies such as Martingale, the bet amount must be constantly increased according to certain rules, which requires playing at tables with a high maximum limit.

Age Of The Gods Roulette

In addition to table limits, bet types may have their own limits. Most often, this concerns the maximum betting limits. For example, there is a roulette table with a minimum bet of 10 GBP and a maximum of 5000 GBP, but this does not mean that you can place any bet you want in this range. For instance, you can make outside bets (red/black, odd/even) from 10 GBP to 5000 GBP. But if you want to make inside bets ( Straight-up, Split, etc.), you may be limited to the maximum bet; for example, maximum table limits are 5000 GBP, but the maximum limit of the Straight-up bet is 2000 GBP.

In the table below, you can see a comparison of the betting limits in several popular roulette games from different providers.

Step 2: Wait for the croupier to spin the wheel

After all, players have placed their bets, the croupier announces, "no more bets". It is not possible to place bets after this announcement. This also means that the second phase of the game has begun, as immediately after the croupier says "no more bets", he spins the roulette wheel and drops the ball on it. It is forbidden for anyone other than the croupier to touch the wheel. If a player touches the wheel for any reason, the game will be void, and bets will be refunded.

Step 3: Wait for the results

After the wheel stops, the croupier announces which number and colour the ball has landed on. This means that the third phase of the game has begun: payouts. Players who bet on the winning outcome will get paid based on the bet amount and the payout value of that bet. For example, straight bets pay 35:1. This means that a bet of 10 GBP will receive a payout of 350 GBP (10 x 35).

It is also possible to place combined bets in roulette. If you have placed such a bet and won, the payout will be calculated based on the amount of the bets placed.

Step 4: Play in the next round or not

Making payments indicates the game is over. After completing the payouts, the croupier starts a new game and accepts new bets. This continues until he says “no more bets” once again, and this cycle continues. Players who won or lost in the previous game are free to join the new game or not.

There are three basic variants of classical roulette: European, American and French. These variants are the same in terms of general rules, but some have additional betting options and/or rules.

The French and American variants of roulette use different betting rules than the European variant. These rules do not change the betting options or the payouts but reduce the house edge of the game, and for the same reason, allow you to win more in the long run.

A rule only seen in the French variant. If the player places a bet that pays 1:1 (red/black, odd/even, low/high) and loses, they get half their bet back. This rule can reduce the house edge as low as 1.35%.

A rule seen only in the French variant too. If the player places a bet that pays 1:1 and loses, this bet repeats in the next round. If the bet loses again, no refund will be given, but if they win initial bet will be to pay.

A rule only seen in the American variant. If the player bets on 0 and 00 and loses, half of their bet is returned. So, it's like La Partage but only valid for 0 and 00 bets. This rule can reduce the house edge up to 2.63%.

What is House Edge in Roulette?

House edge is the percentage that shows how much profit the casino will make from your bets. For example, the house edge of European roulette is 2.70%. This means that the casino will earn a profit of 2.70 GBP for every 100 GBP you wager.

How to calculate the payouts at the end of the round?

In roulette, it is predetermined how much each bet type will payout. So, when you win, your stake is simply multiplied by that payout. For example, a column bet pays 2:1. So if you wager 10 GBP and win, you will receive 20 GBP (10 x 2).

What is RTP in roulette?

RTP is the percentage you can recover from your investment in the long run. For example, the RTP of European roulette is 97.30%. This means that for every 100 GBP you wager, you can win back 97.30 GBP

Which roulette variation is more profitable?

What are 'cold/hot numbers' in roulette?

What is an 'Even Money' bet?

These are the names given to bets that pay 1:1. So for example, if you deposit 1 GBP and win, the payout will be 1 GBP too. Even money bets in roulette are red/black, odd/even, and low/high. They also offer the highest winning chances.

The only green number on the roulette wheel is 0. Players can bet on this number as well. If you only bet on 0, you have made a straight bet and the payout will be 35:1, like any other straight bet.

Ask your question in our QA section

Was this page helpful?

Thanks, we appreciate your reply!

Sorry for the inconvenience

Please tell us how this article could be improved

We use cookies to ensure that we give you the best experience on our website. If you continue to use this site we will assume that you are happy with it